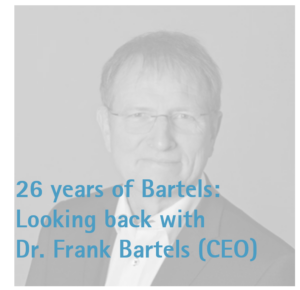 This month, we are celebrating 26 years of Bartels Mikrotechnik. We take this opportunity to look back at over two decades filled with micropumps, microfluidics and microtechnology.

In this post, Dr. Frank Bartels, founder and CEO of Bartels, is taking us back to the very beginning of our company. Read here why he founded Bartels Mikrotechnik and the challenges he has faced in those early days.

We are looking back with Dr. Frank Bartels…

The mid-90s were an exciting time. Microsystems technology was focused on acceleration, pressure and angular rate sensors. Later, microtechnology has conquered the market in our smartphones. In addition, non-silicon technologies for mechanical and fluidic applications emerged in the 90s. The first lab-on-chip ideas for diagnostics appeared.

However, my employer at the time was involved with work for an asthma inhaler. I wanted to be part of this exciting development of microtechnology and its transfer into applications. So, I planned to start my own company that would allow me to live my own style.

This was made possible by the very supportive situation in NRW and Dortmund which greatly encouraged such start-ups. However, I quickly realized that creative application design alone was not enough as a business approach. Therefore, I added the in-house production of microstructures by means of laser structuring. Microfluidics for the life science world – boosted by the developments of the new market – thus became my creative home.

This remained even with the necessary shift to other markets with the collapse of the new market. For example, our small micropump was developed to deliver fragrances to nebulizers.

The necessity to adapt to changing market conditions and technologies has been preserved until today …. and it is still a lot of fun.